Harpo and I headed to North Bend to visit Twinless during her brief sojourn back in the northwest, and to meet her sister who we’d heard so much about. Bug and Sprout joined us, and the next day while Twinless and her sis packed for their south American holiday we headed up Si for some snowy fun. 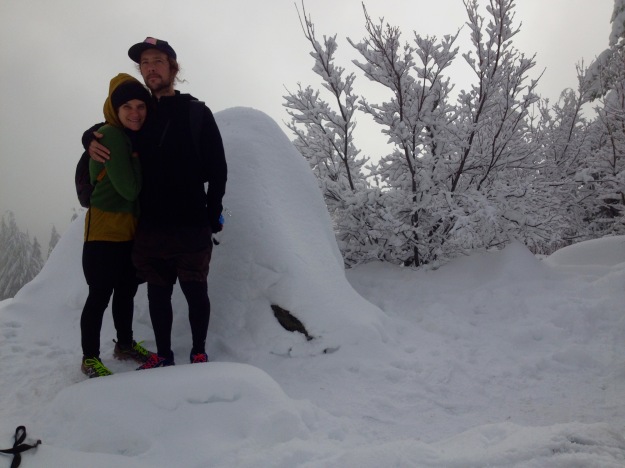 Dedicated urbanites “know” beyond shadow of doubt – because doubt never raises its disturbing head – that civilization is the real world: you only “escape” to wilderness. When you’re out and away and immersed, you “know” the obverse: the wilderness world is real, the human world a superimposed facade… The controversy is, of course, spurious. Neither view can stand alone. Both worlds are real. But the wilderness world is certainly older and will almost certainly last longer. Besides, the second view seems far healthier for a human to embrace. — Colin Fletcher River (1997)

Harpo and I decided a couple of days on the Washington coast would clear our minds and hearts as we finish one holiday and prepare for the next. We’ve been coming out to La Push for a few years now, always during the winter, and enjoying the solitude of the stormy beaches. This trip was no different – with incredible breakers driven by unprecedented heavy rain throughout the Northwest. The skies were leaden grey, occasionally sparkling shot thru with distant light, and weeping heavy mist. Perfect weather for vampires or PNW natives… the beaches were almost deserted, often allowing us to lay first tracks.

Harpo testing out the neoprene socks at high tide 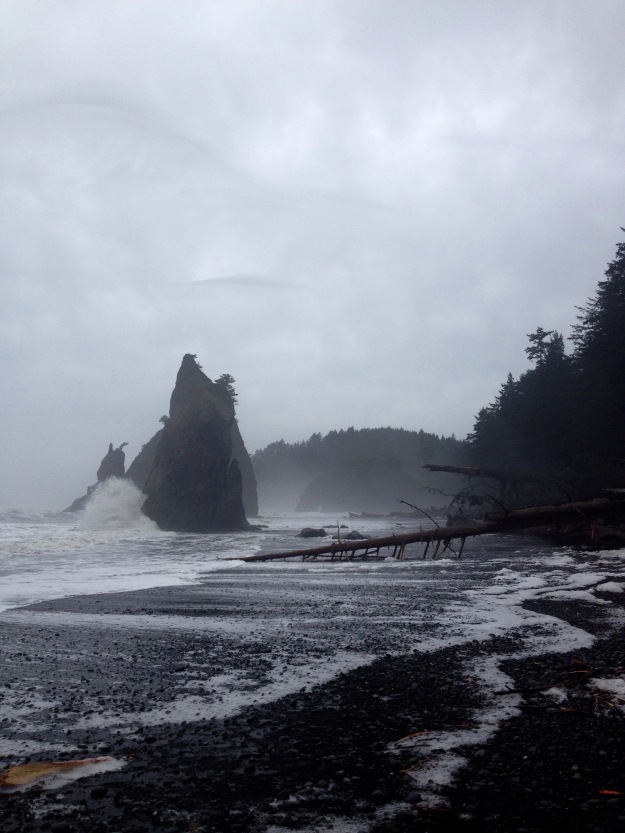 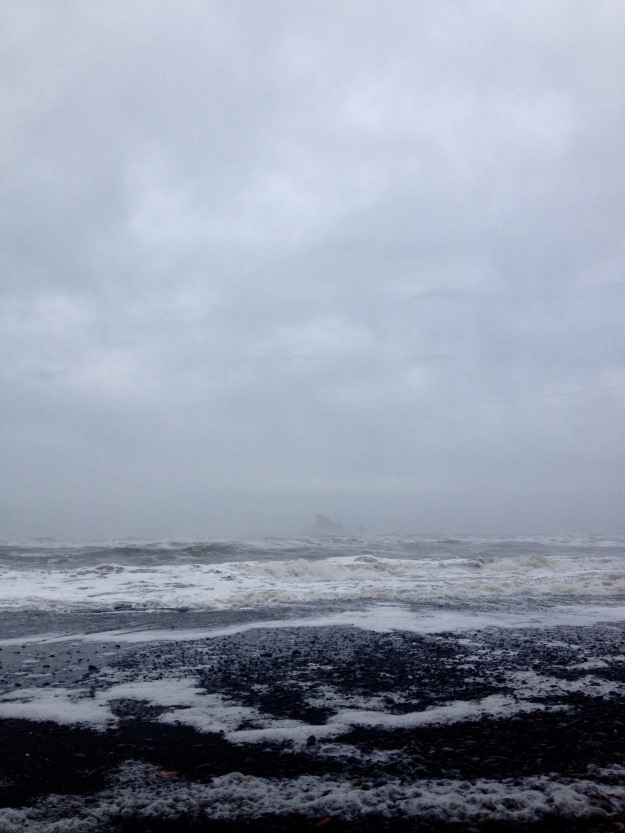 The surf was heavy, the sea swollen after recent storms – the breakers were hitting the high tide mark hours after 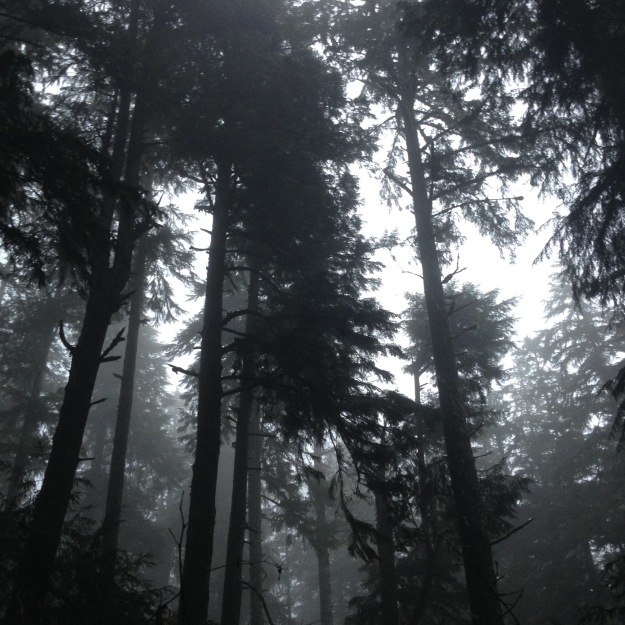 Northwest forests are always spooky in the half misty light – ghosts abound, the imagination runs ahead of the feet…

Harpo and I were looking for a little cool down hike after finishing our southbound PCT hike this year. We were staying with her lovely cousin & her husband in Hesperia, CA looking for local hikes while sitting in their hot tub. Of course, one of the most difficult hikes in North America came immediately to mind…

The San Jacinto mountains in southern California are the last major range the PCT traverses on its way meandering towards the Mexican border. Approaching the San Jacinto Peak the PCT proceeds under Highway 10, across a brutal stretch of wash out, and up the northwest side of the range – turning off just shy of the summit and proceeding down to Idyllwild. Future Dad and I broke off from the Wrong Way Gang and took the 8 mile side trail to summit San Jacinto. The view had been totally socked in, but we made it worth our while by carrying out 10 lbs of trail trash on our way. Descending to Idyllwild we ran into an older gentleman, foaming at the mouth, who excitedly told us he was about to finish the hardest day hike in America, the Cactus to Clouds route. It was difficult to get a word in edgewise (he was the type who inhaled quickly and exhaled words, spitting flecks of foam the entire time) but we gleaned the existence of a route from the Coachella Valley floor to the San Jacinto Peak – covering 14 miles (23k) and ascends 10,300 feet (3,100 m).

According to some the Cactus to Clouds route is one of the most difficult and dangerous day hikes in America. Beginning behind the Palm Springs art museum (elevation 500), the Cactus to Clouds route proceeds up ridges on the east side of the San Jacinto mountains along the Skyline Trail, climbing just under 10 miles and 8,000 feet before intersecting trails around the Palm Springs Aerial Tramway. This is where most people quit – you can ride the tram back to Palm Springs for $12 and be done. OR you can continue up the 5.5 mile summit trail, which leads to San Jacinto Peak climbing another 2,400 feet to the second highest peak in California at 10,834 feet (3,302 m). The trip then rounds out with the 5.5 mile / 2,400 foot descent back to the tram, clocking 21 miles and about 13,000 feet of elevation change. Not bad for a day in the hills…

Harpo and I slept late and didn’t arrive in Palm Springs until 8am… most people start hiking the trail around 3am to avoid the desert heat. We were blessed with light, hazy clouds all day – really fortunate considering the possible alternatives. The first 8 miles traverse several ecosystems – from low scrub desert chaparral to manzanita groves to alpine forest – through a series of well graded switchbacks following white spraypaint blazes. I could see this being confusing in the dark or snow, as there are numerous trails all headed (roughly) the same direction. The last 2 miles before intersecting the Tramway proved the gnarly part – much like Mailbox Peak I felt like I was climbing stairs the entire time, tho the trail (which is listed as unmaintained) was always pretty easy to follow. There was cursing, and a few tears, but we made it to the intersection with the Tramway in about 4 hours. From there was the easy part – well maintained and marked trail, pleasantly graded up to the summit.

Well, kindof easy considering we’d already had the most physically rigorous day for either of us 2700 miles and 4.5 months of hiking. But now was not the time for complaints… onward and upward, as they say.

We continued climbing, summiting San Jacinto Peak in frigid temperatures (it was warm in Palm Springs when we started at 8am and close to freezing at the summit – there’s about a 30 degree difference between the base and peak) after just under 3 hours on the summit approach trail. Our total ascent time was just over 7 hours for just over 14 miles – not breaking any speed records, but not slouching either. The view from the summit of San Jacinto is something to behold – San Gorgonio, the Coachella valley, and much of the Inland Empire visible on clear days, and clouds spilling over and splitting the lower peaks of the San Jacinto range. But then again, what is beauty without suffering?

We were stoked, took a couple pictures and headed down post haste. With the 12 minute tram ride – displaying what is truly a marvel of modern engineering – our journey was complete in right around 10 hours, and just as dark was falling. We caught a hitch with a delightful fellow we met in the last mile descending to the tram – he was down from Alaska for a month staying in Palm Springs. We had a great conversation about hiking, the desert, and family – buoyed by our success, and looking forward to meeting Harpo’s folks in Vegas the following day.

Cactus to Clouds is no joke, and to treat it as such is to endanger yourself – it was an extremely difficult hike. Even for a couple of PCT thru hikers who had just finished walking all day, everyday – we still had our meltdowns, challenges and eventually our triumph. I think the hike was only possible for us because of the overcast weather. Sweating in the desert the entire way up we easily could have succumbed to heat stroke – especially with the extra weight of more water. We managed to drink 1 liter before we started, and each carried 3 liters, refilling 2 liters at the ranger station near the tram. That’s a total of 6 liters for the duration of the hike on an overcast fall day… many sources recommend carrying up to 3 gallons (12 liters / 25lbs) for a hot day starting at 3am.

There were several great resources we used in researching the route and getting environmental and anecdotal information – the excellent information provided by  Perry Scanlon, and Hikin’ Jim’s post on the same subject.

Harpo and I first hiked the Bogachiel River trail when we were starting to train for the Appalachian Trail hike in 2013. It was as wet as we remembered. And although it’s hard to romp hip deep in icy water, we did our best. The trail was muddy, wet and due to recent storms there were numerous blowdowns – but it provided a welcome (if not wet) few hours of hiking. 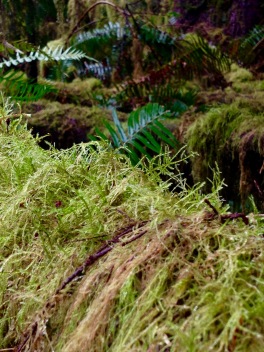 Everything soft, green and glistening – quite a bit different from our recent hiking in the desert, where everything is super sharp and pokey

People laugh at us for hiking with umbrellas, then I remind them we’re from the PNW.

Afternoon light filtered through the mist on a mostly abandoned trail – once hitting the Bogachiel River Trail proper, we’ve never run into ANYONE… 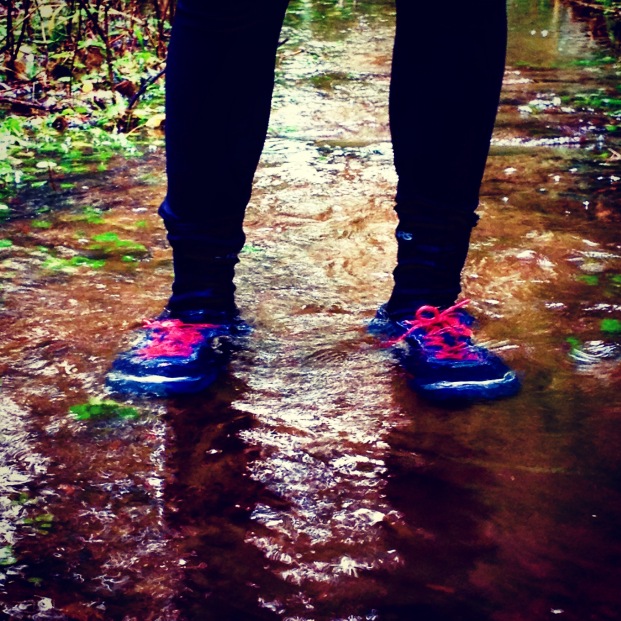 I get my chance to test the neoprene socks. Also the Lone Peak trail runners by Altra
We got to test some new gear – NRS Hydroskin .5 neoprene socks. These actually worked great when paired with wool liners – tho to say they are ‘waterproof’ is a misnomer. Neoprene works by allowing the body to heat a small area of water close to the body – so like using a wetsuit, you’re wet but warm.

I tried the neoprene socks alone, wool socks alone, and the wool/neoprene combo. The wool/neoprene combo was definitely the warmest, allowing for a quick reheat every time our feet were drenched again. Both Harpo and I remarked we’de like try the neoprene socks if we hiked the AT again, especially towards the end of the season. I used lightweight DarnTough no show socks as liners the first day, and DarnTough hiker crew socks the second day – my only complaint is the wool socks retain too much water, causing the feet to feel super heavy. I’m excited to try the combo with thin REI wool liners, as well as experimenting with poly liners. These beat a bread bag for sure! Tho considering carrying the weight just for those times when your feet are wet all day is tough….