I went to see a great show at On the Boards last night. OtB is known in Seattle as the premier presenter of new theatre and dance works. Riding on a Cloud, by Rabih Mroué, fits squarely in the modern theatre category – featuring a single ‘actor’ seated at a table with various props (a cassette machine, a DVD player, a stack of DVD’s, some paper notes, a glass of water) and a large video screen. The piece seemed simple at first, even minimal, yet revealed its complexity in very satisfying ways.

The work plays on the balance between fictive and real narratives, the precocious nature of memory, and the problem of representation. Yasser, the ‘actor’ plays himself on stage (thereby frictionally representing his ‘real’ self, as everything in theatre is fiction), occasionally wandering away even from his role as himself to observe the audience. The audience tries to determine what is true versus fictional in Yasser’s narrative, which is presented through a series of DVDs he plays throughout the performance. It’s telling that after 20 minutes of performance we learn that the DVDs are made in the wake of Yasser’s traumatic brain injury, the result of a sniper’s bullet during sectarian fighting in Lebanon (a true story, as it turns out). The DVDs are footage created in response to a real event which dictates the dramatic action of the show, rather than the other way around. We learn that Yasser has difficulty with representation – he is unable to create relationships between objects and photographs of the same objects, even photos of himself. The show is full of things which could be true, and some which might not. Other things are only hinted at, and then revealed over time – these reversals highlight the tension between the dramatic narrative and the nearly silent actor on stage, who’s story is represented only through media – otherwise he exists only as he is, somewhat charming and a little bit injured.

A Brother’s Tale, the New Yorker review of the show, does a good job of situating the work in it’s national and political context. I found myself more interested in it’s exploration of our relationship with language and representation. Creating our personal narrative – our portrayal of ourselves to others, is our most significant act of representation. This practice often hinges on language, our most basic tool. When we share our experience with others, we depend on language to bridge the gap between us, to ensure the continuity of our experience, to reassure us of our assumed truths. These are narratives that we depend on being true – our memories, relationships, our personal history and moral code. Language and (Bataille would argue) sex are the only hope humans have of overcoming our inherent isolation.

My x-ray after brain surgery – the result of a bike accident, I was in a coma for 12 days. The last thing I remember was having dreadlocks (I hadn’t had a haircut in a decade)… imagine my surprise at waking up unable to speak, fully intubated, and with a rat tail. Also, my business partner at the time had press released my injury to the Stranger, and while I know not to read the comments, my moms did not – which caused her considerable anguish – and overlays another layer of ‘unreality’ on a very surreal situation.

The experience of the traumatic brain injury (TBI) brings into sharp focus how narrative is plastic, flexible, and often uncertain. A sufferer of a traumatic brain injury, I experienced aphasia similar to what Yasser describes. The radical shift aphasia engenders is a restructuring of language, which in turn drastically shifts how we understand our relationships with others and ourself. I relearned how to speak, the names of things, and beyond that, redefined my relationships with people. Or more accurately, taught myself to believe the stories people told me.  If we can not assume that any narrative is true, then even memory becomes an uncertain and slippery thing. I had the hardest time connecting to close friends, where I could not connect emotionally to the narrative they presented – I felt cut off from intimacy, alienated and alone. Retelling stories of people around me, including my own, eventually allowed me to reconnect with myself and others – to recreate myself in my own image – yet for me the certainty remained that I was a completely different person before and after. For any survivor dealing with aphasia, there is a very real and continual question about what is true versus what is believed, and there is no clear way of distinguishing which is which. I have spent years trying to dovetail these two competing realities, sometimes more successfully than others.

Ultimately, Riding on a Cloud is a dark but uplifting show, addressing heavy issues with poignancy, humor and a genuine and interesting voice. Yasser becomes a poet after his TBI – after his loss of language he sees through the broken words to discover the most direct and beautiful phrases. His life, along with the framing of his personal narrative through the device of a theatre show, are victories of identity over insecurity. His story, whether true in whole or in part, allows us to examine our own stories. Yasser’s overcoming is an affirmation of personal narrative, revealing the inherent validity of our struggle for identity, the value of our own stories and the importance of telling them. 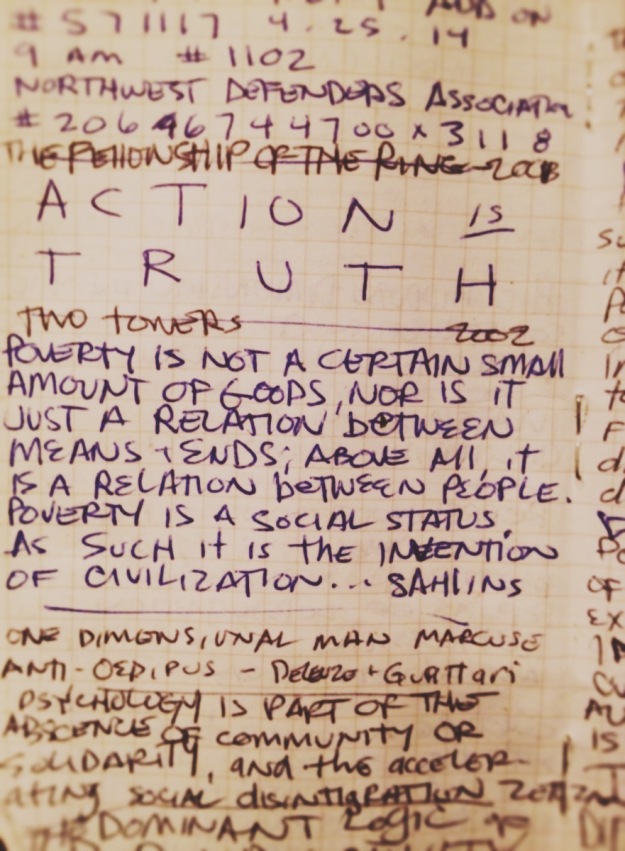