Uh oh. It’s only January and the SOBOs of 2016 are wringing their hands about start dates.  I hear you. Snow melt in the North Cascades is a topic of much wailing and gnashing of teeth. This post explains my methodology for choosing a start date… 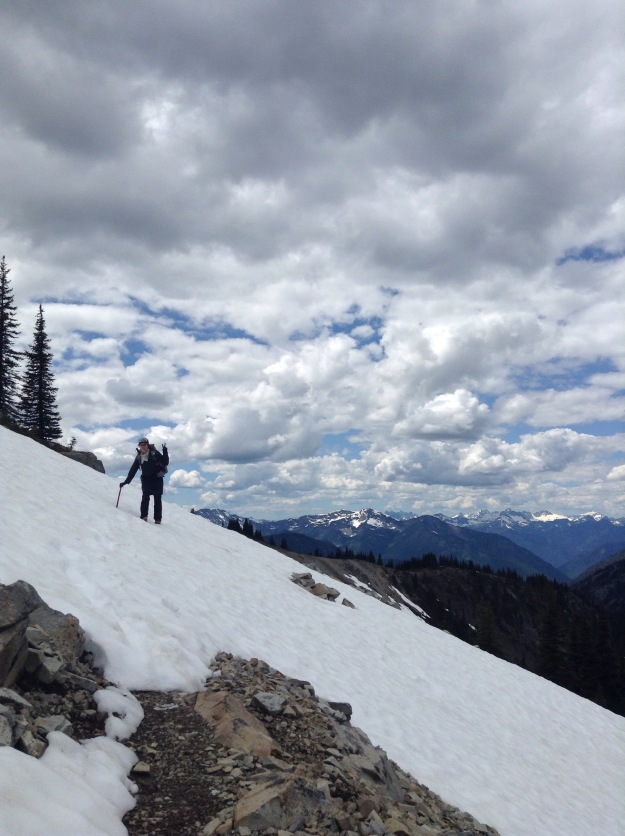 Colloquial  wisdom suggests starting your SOBO hike once the Hart’s Pass Snotel reaches zero. Or better yet a week or so later, unless you love postholing and are really looking forward to using that ice axe.

Hart’s Pass is 30 miles from the Canadian border and elevation 6,100’… not the highest elevation in the North Cascades, so once snow is melted at the pass you may still have snow-filled avalanche chutes to traverse. Be prepared for snow travel and know your own limits.

We began our 2015 hike 9 days after the Snotel data reached zero at Hart’s Pass. I STILL carried an ice axe despite the exceptionally low snow year, and as you can see from the photo above, I was happy to have it for balance, leverage and peace of mind.

But how can you guess when the snow levels will reach zero?

Yung buck, it is still too early to tell.
HERE’S THE A SPREADSHEET WITH SNOTEL DATA FROM THE LAST 5 YEARS AT HARTS PASS AND MY NON-EXPERT METHODOLOGY FOR USING SNOTEL TO HELP DETERMINE SAFER START DATES

UPDATE: I recommend clicking on the link above for an overview of snotel stats from the last few years, and my analysis of that data… but a few highlights: