We all gots to work sometime, I guess…

Harpo & I are happy to be settling back in to Seattle, and taking a bit of a break, after a long stretch of working really, really hard. In addition to our other freelance gigs we just finished an engagement with Saint Genet, the experimental theatre/performance art company we work with. Harpo works as the company manager – basically the director’s right hand, and Groucho works as an art director and graphic designer – we also both perform in the show and serve additional roles like communications director, prop master, war chief, and therapist. 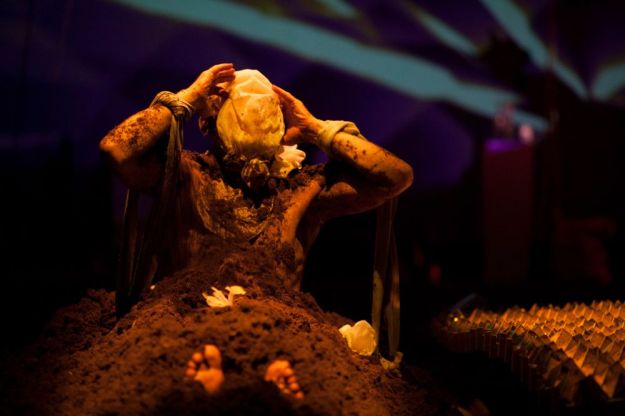 Alan emerges from the grave where he’s been buried alive for up to 4 hours…
Photo by Dan Hawkins.

We presented Paradisiacal Rites at the Luminato Festival in Toronto, which was a great adventure when we had moments to escape the black box (which in this case was the Museum of Contemporary Canadian Art – who were awesome). Toronto had great raw/vegan food, and lots of it close to the MoCCA, which was awesome because apparently experimental theatre requires 18 hours a day to make… and really good snacks. You know you’re doing good work when at least one person hates it… on the on the other hand it’s nice when somebody likes it, too. It was also an opportunity to put in time with homies who didn’t travel with us, but are still integral to the process, like Casey Curran, Dan Hawkins and our friends at Publicide.

Overall, it’s great to work with the body politic which is Saint Genet – a crew of talented, kind, and beautiful folk. The 6 months of budget meetings, work parties, and endless 4 hour rehearsals were a pleasure to share with you all… and thank god that’s over.

King James in the installation part of the Paradisiacal Rites show – a four hour excursive exercise in suffering?
Photo by Dan Hawkins